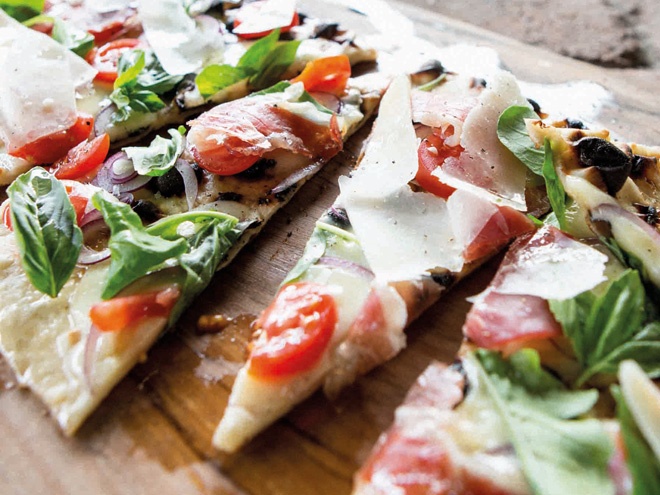 Braai lovers, these mouth-watering braai recipes are for you, they’ll lift your game and raise the bar, making you the envy of braai lovers everywhere.

Way back, when I first started filming my show Cooked, I made a dustbin pizza for my crew before we hit Splashy Fen music festival in the southern Drakensberg. That was my attempt at a braaied pizza. In a 45-gallon metal drum on top of two unglazed terracotta tiles, I had a makeshift pizza oven that baked delicious pizza in less than 15 minutes. This time round, Bertus (a pro at simple and delicious food) made pizza straight on the braai grid. I had my doubts, especially after all the effort I went to making a pizza oven using a dustbin, but admittedly have to swallow my words. So try this if you don’t have a dustbin lying around in your backyard. It’s way simpler. I love learning new tricks like this. Bertus uses the same basic bread dough recipe that I’ve used for years, so I guess in the world of outdoor pizza we’re even. Until next year…

1. Combine the flour and salt in a large mixing bowl. Activate and dissolve the yeast by placing it in another bowl and adding the warm water. Give it a stir, and sprinkle a handful of flour over the mixture to prevent the yeast from forming a crust. Leave the yeast mixture in a warm spot for about 10 minutes or until it begins to froth and gradually add it to the flour, mixing it well until it forms a dough. The only way to do this is with your hands. If the dough is too sticky, add a bit more flour; if it’s too dry, add a splash more water, and so on. Knead for 10 minutes until the dough has a smooth, elastic consistency. Sprinkle some flour onto your work surface, place the dough on the flour and cover with a damp tea towel. Leave the dough to rise for about 30 minutes or until it has doubled in size.

2. Sprinkle some flour on a clean working surface and tear off a fist-sized piece of dough. Using your fingers or a rolling pin (or a bottle of wine) roll the dough out into your preferred size and shape – keeping in mind it can’t be bigger than your braai grid. The border can be slightly thicker if you like a thick crust pizza. Bertus didn’t do a tomato base, but used olive oil and sliced garlic instead. This is Bertus’s favourite topping, but the possibilities are endless, so go wild.

1. Take the pizza base and put it on a grid over moderate coals. Braai the base for a couple of minutes, or until the bottom is crispy and golden and the top starts bubbling. Flip the base over and brush the top with the garlicky olive oil. Take out a couple of the garlic slices and arrange them on top of the pizza.

2. Next, scatter sliced mozzarella on the base – as much as you like. Reduce the heat of your coals slightly by scraping some to the side – the slow heat will give the mozzarella time to melt without burning the bottom of the pizza. Go ahead and drizzle some more garlicky olive oil onto the pizza, then once the cheese has melted, remove the pizza from the heat.

3. Top with red onion, tomatoes, Parma ham, basil, rocket, Parmesan shavings and season with salt and black pepper. Cut into odd-sized slices and let your friends dig in (once you’ve had your slice). Then let them each make their own pizza.

By Andrew and Thando

When you get to walk the Wild Coast foraging for food, one ingredient you’re bound to find are mussels. Can you imagine picking mussels and then preparing them right there on the beach while the sun is setting in the background? Life really doesn’t get any better than that. It’s simply perfect. Get out there and do it… but make sure you’ve got a permit before you do – available from the post office.

1. First up, steam the clean, beardless mussels until they open up. Toss the ones that didn’t open back into the ocean and set the open ones aside. Now, heat a potjie over moderate to hot coals, add a glug of olive oil and fry the onion, garlic, chilli and ginger until the onions are soft, then stir in the green curry paste.

2. Next, chuck in all the spices, mix everything around and cook for another minute or two. Add the whole peeled tomatoes and once all the liquid has evaporated, pour in the coconut milk. Once the sauce starts to simmer, add the mussels and cook for about five minutes more. Take it off the heat and serve with freshly baked bread (great to mop up the sauce) or rice, good wine, great friends and a spectacular view of the ocean.

Find some more recipes for braaing and camp food here

This is the ultimate book for braai lovers. Authored by Justin Bonello, Bertus Basson, Marthinus Ferreira and written by Helena Lombard, Roads Less Travelled: The Ultimate Braai Master Second Series is filled with mouth-watering recipes like White Bean and Smoked Feta Soup, Carpetbagger and Fire-Baked Lemon Tart. It’s published by Penguin Books and can be found at all good bookstores.