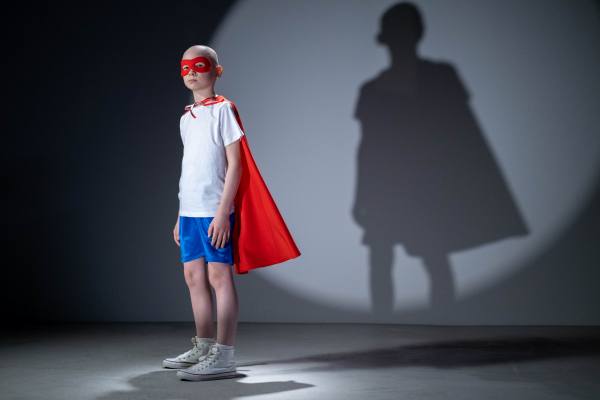 Fantasy play, particularly dressing up, helps children to develop and practise the life skills they will rely on in later life.

Should parents ever be concerned with fantasy play? Experts say there is no cause for alarm, particularly at a young age.

Dressing up as Spiderman, a pirate, or a snow fairy  is an essential part of growing up and may even give your child a learning advantage over others.

At the forefront of play theory are Americans Dorothy and Jerome Singer. They are authors and the directors of the Yale Family Television Research and Consultation Center. Age four is what the Singers call ‘peak season’ for fantasy play. And, they say, if parents and teachers are trained to engage in make-believe play with three to five year olds, it can  strengthen the children’s ability and skills for doing well at school.

When children engage with make-believe play – pretending to be dragons, imps, trolls, the president, cowboys or even a baby – they’re “practising the social, emotional and intellectual skills they’ll rely on in life,” the Singers say.  Even dressing up as a baby takes on an altogether benign connotation when you consider that, from the child’s perspective, the baby seems to be the most powerful member of the family.

Someone who has concerns about her child’s take on fantasy dress-up play is Thandiwe, a Johannesburg-based legal secretary. Her five-year-old, Oliver, loves to ‘dress up’ and act like a street child, limping, whining and begging while sniffing his sleeve, even though he has no idea that it indicates glue sniffing. She finds it uncomfortable, to say the least.

But, say the experts, this is just a child playing out deep-seated fears (of neglect, abandonment, being orphaned and poor) . And, playing out these fears allows the child a sense of mastery over them.

Practising to be grown up

“Fantasy play and dressing up in particular are ways in which children ‘practise’ to be grown up,” says Cape Town-based educational psychologist Dave Pinchuck.

“It helps them to feel like they’re in charge and in control,” he says. “It’s an example of them unconsciously trying out other roles and other ways of being in the world. It can even help them to develop empathy. Children generally feel quite small and powerless in the world. Dressing up can be a learning experience. More importantly, fantasy play and dressing up are essential parts of development.”

He adds that through fantasy life and fairy tales, children resolve issues and difficulties that they can’t otherwise even express. For children, play is the natural medium of expression.

Johannesburg-based psychologist Debbie Bright concurs.“Children are fascinated by their environment and believe in the possibility of the metaphysical. Different costumes allow them to experiment with different roles and experience different emotions and sensations. And, it stimulatestheir minds beyond the concrete.”

Play in children works in much the same way as play in wild animals. Young animals learn every survival skill they will need by pretend-stalking, pretend-pouncing and general rough-and-tumble, mostly initiated and encouraged by their parents.

And if parents do take note, says Bright, they may find they have access to the language of the child’. “If one can tune into the messages the child is portraying, it can be incredibly rewarding,” she says.

“Children play what they see, and watching their play can give telling clues to their inner state,” adds Pinchuck.

But no matter what they play at or who they ‘are’ when they dress up, it’s vital to retain a sense of reality, too. Children must understand that although they can pretend to be someone else, they will always be themselves.

As Pinchuck says: “It’s great for a child to feel as powerful in the world as Superman, but you don’t want him to jump off a building.”

Parents should not be alarmed if their child’s fantasy play or dressing up occasionally tends towards the violent or seemingly antisocial.

Gerard Jones is the author of Killing Monsters: Why Children Need Fantasy, Super Heroes, and Make-Believe Violence. He says that violent games mean different things to children than they do to adults. So, parents should not ‘impose’ their understanding on children. He points out that, very often, children are more interested in a game’s emotional meaning,than its literal one. Engaging with fantasy figures, even those that are destructive, can help children to “feel in control of these forces”, explains Jones. It can assist them in integrating scary feelings and aggression.

Debbie Bright agrees, adding that parents should not be concerned about violent episodes in play ‘within reason’. “Obviously it is not a good idea for children to be viewing and subsequently re-enacting, violent TV. However, it is probably okay if anger is being expressed in a contained environment. But, if this continues for long, it may be worthwhile to consult a therapist, to assess whether perhaps there is some significant underlying trauma or anger,” she says.

“You need to draw the line around ‘whether anyone is getting hurt’, ” says Pinchuk. “Remember that children feel guilty after they’ve been responsible for hurting anyone. If they don’t, it may indicate a problem.”

Back to School or Homeschooling Stress Management

The Future is Digital: Get Your Child Ready