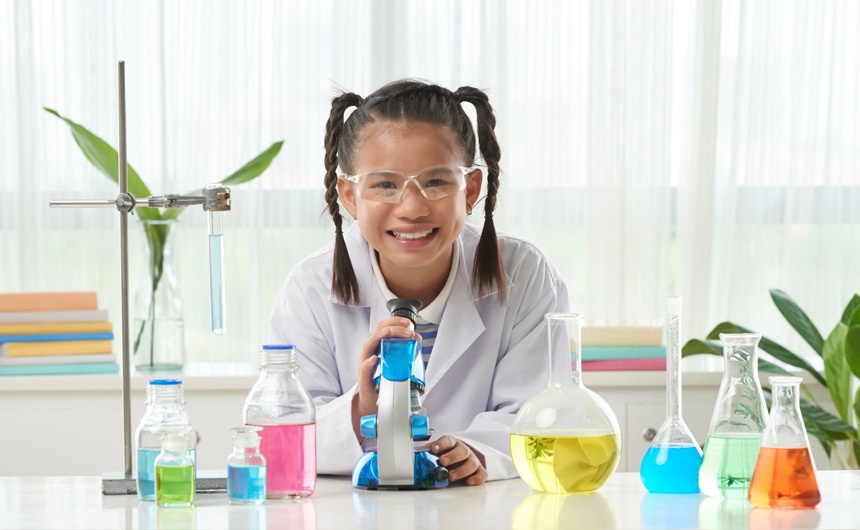 Start learning about science in the kitchen. Using ordinary household ingredients and equipment you can turn your kitchen into a scientific lab and a teaching hub.

A child’s natural interest in science can be nurtured and developed in the comfort of your home by experimenting. Mixing various household ingredients and testing their response to different temperatures and observing the effects is a good way to start learning about science in the kitchen. Here are some mind-boggling experiments to try.

Teach children about crystal formation by growing your own. Place one cup of water and three cups of sugar in a saucepan and heat. Stir until all of the sugar has dissolved. Transfer this syrup (be careful, the syrup is very hot) into several bottles, colouring one or two of them with food colouring.  Place a wooden skewer in each, or drop a string into each bottle, securing the one end with a weight and tying the other to a short skewer. Let these cool down slowly. As the mixture cools, crystals begin to form on the stick or string. This does take a few days, so watch out for curious little people who want to check on progress every few hours. The crystals also grow on one another, so be careful not to knock them off.

Build a volcano with some air drying clay (available at a craft shop) and place it on a paper plate. Leave to dry. Pour several teaspoons of bicarbonate of soda into the centre of the volcano. In a jug, mix a few tablespoons of vinegar with a few drops of red food colouring. Pour this into the volcano and stand back as the ingredients react to make carbon dioxide, and the gas bubbles up.

Get five clear glasses and fill each half way with water. Line them up and place blue, red and yellow food colouring in the first, third and fifth glass respectively. Fold up half a piece of paper towel and place one end in the coloured water and the other in clear water. Repeat this until you have a paper towel connecting each glass to the next. As the paper soaks up the water, the colours start to walk across the bridges. Eventually your colours will combine. This demonstrates how new colours are made and how absorption works. You can also place white flowers in coloured water and watch them change colour.

Demonstrate how weather works by making a cloud in a jar. Carefully fill a glass bottle with boiling water. When the bottle has warmed up, empty out the water until the bottle is about a quarter full. Light a match and drop it into the bottle. Quickly cover the top of the bottle with a small packet filled with ice. The hot air rises and condensation begins when it meets the cold air, much as it would when clouds form. The movement of hurricane winds can be shown by stirring a large bowl of water until you create a steady flow. Gently add one or two drops of food colouring and watch how they swirl downward in the shape of a hurricane.

For more fun science, have a look at these websites:

From Odd Socks to Playful Puppets

A Fusion of Taste