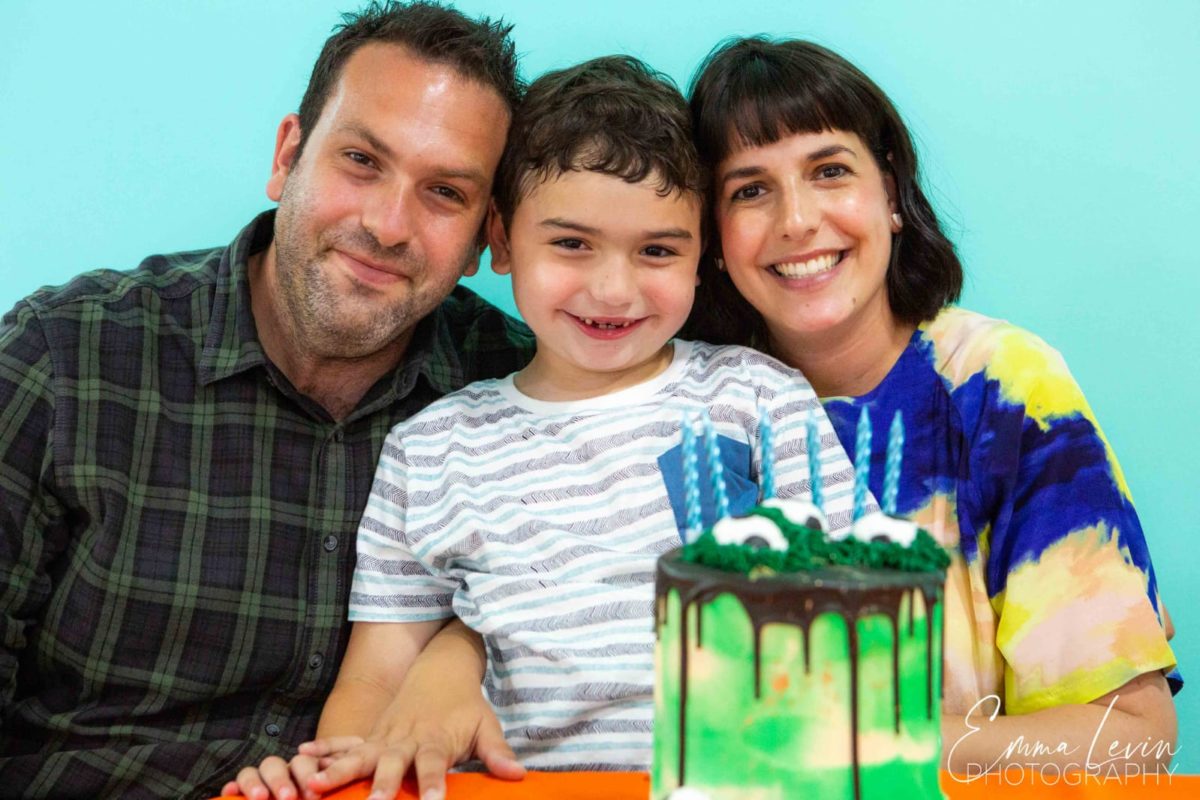 The first thing you notice about Aaron Lipschitz is his energy. A six-year-old with a permanent smile, Aaron loves everything a child his age should: putt-putt, soccer, tennis, his school friends, swimming lessons, and his dog Luna.

Aaron is also incredibly bright; he taught himself to read at five years old, and is thriving at Alon Ashel Pre-Primary in Sea Point, Cape Town.

But what you may not realise when you meet him is that Aaron has spent almost half of his life in the hospital. In a handful of years, Aaron has survived more medical hurdles than most of us have to endure in a lifetime.

For three years, Aarons’ life-threatening infections and complete intolerance of food baffled his doctors. It took a bone marrow transplant to keep Aaron alive, but it almost killed him in the process. With a pioneering medical team, a dedicated community, and more than a few miracles, Aaron’s parents have withstood every parent’s nightmare. Aaron continues to defy the odds, every day of his life.

The long road to a diagnosis

For the first two weeks of Aaron’s life, he was a perfectly healthy child. But after a few weeks he developed a temperature and serious diarrhea. The doctors weren’t extremely concerned at first, as gastronomic problems are relatively common with young infants.

Four weeks later, though, Aaron was back in the hospital, experiencing incredible discomfort with feeding. The doctors thought it was reflux disease. Then a protein intolerance. Perhaps a multiple food allergy symptom, or even inflammatory bowel disease. Taryn, Aaron’s mother, went on a very strict diet to help ease Aaron’s pain, but there was still no relief. Ultimately, they diagnosed him with a metabolic absorption disorder, meaning he was unable to tolerate any food or breast milk – only water.

Then, things got a whole lot worse.

At about a year old, Aaron experienced what would be his first of several Salmonella Septicemia episodes, or a salmonella infection in the bloodstream.

For the first three years of his life, there was still no diagnosis for Aaron’s extreme condition. He survived on a specialised hypoallergenic formula which he received through first through a bottle and later via a nasogastric tube when the quantity of milk needed to sustain him became too much for him to drink.

Aaron experienced three Septicemia episodes in as many years.

Finally, when he was three, Aaron’s medical team conducted genome sequencing and discovered his interleukin-12 receptor defect, a defect in the receptor in the human body responsible for activating the immune system, which was preventing Aaron’s body from fighting minor infections. The interleukin-12 defect affects fewer than 300 people worldwide and Aaron is the only child in South Africa to be diagnosed with it. There is no cure for the defect.

Always in the hospital

Those first several years were a massive challenge. Aaron was in the hospital twice weekly to receive his immunoglobulin treatment, intended to boost his immune system and fight off his recurrent infections. Birthday parties, holidays, and even dinners at home were tricky, because Aaron wouldn’t understand why he couldn’t eat like everyone else. Financially, the burden was massive.

Taryn explained that the infections came so often that they were always ready to take Aaron to the hospital. “We lived in a constant state of preparation. In our garage, we always had bags packed, because we knew he would get an infection and we’d be going back.”

Because there was little precedent, Taryn explains that she and Steven relied on gut feeling and the advice of their medical team in making decisions for Aaron’s health.

The search for a miracle

At age three, when Aaron endured a third, almost fatal attack of Septicemia, his doctors decided to undergo a bone marrow transplant.

“It was very clear to all of us that we had no choice but to embark on a transplant,” says Dr Deon Smith, Aaron’s physician at Cape Town Mediclinic. “The formula was so expensive, and any slight change to it, he would react. We had to do something. It was the only hope he had to have a normal life.” Before his transplant, Aaron’s parents had spent over 250,000 Rand on formula alone.

The transplant would be a risky procedure, but the team relied on each other and expert opinions around the world in the decision to move forward. “It wasn’t a decision that was taken lightly,” says Dr Smith. “And it wasn’t just us. It was a wider international community of specialists who guided us and said this really is the only way forward.”

Once the decision was made, the medical team contacted the South African Bone Marrow Registry (SABMR) to begin searching for a bone marrow donor for Aaron.

Taryn explained that they knew a local donor probably wouldn’t be found but decided to coordinate drives anyways. “The SABMR told us that if there was a donor, they would probably be overseas. But we thought, let’s take this opportunity to make people aware about the Registry. Maybe we’ll find a donor for Aaron and maybe we won’t, but it didn’t really matter. It was about awareness. Thousands of patients are waiting on their miracle.”

Together, Aaron’s community and the SABMR kicked off massive donor drives across the country. Over 500 new donors registered in a week, dubbed Save Aaron week. That number grew as drives expanded in Johannesburg and Cape Town, initiated by Aaron’s day school and faith community. Dr. Smith called the SABMR “extraordinary” in its pursuit of a donor for Aaron. Taryn echoed the sentiment, explaining, “The SABMR team was so incredible and efficient and just on it.”

Aaron’s parents also started a fundraising campaign on BackaBuddy.co.za, which became the site’s highest grossing fundraiser for an individual ever at over 1.5 million Rand from almost one thousand donors.

Taryn credits the incredible community response to Aaron’s nature. “His story, it’s so inspiring. Despite what he’s gone through, he’s very positive and happy and lives life to the full. I think people resonate with that. There’s no medical reason that he should be here, so I really do think it was the power of the community’s prayer and efforts. There were prayer groups every day.”

A typically private family, Taryn says it was a challenge for her and Steven to handle the onslaught of attention from the community and media. “It went from no one really knowing to half of Cape Town knowing our story. It was quite hectic. My phone was ringing off the hook.” They initiated the Save Aaron Facebook page, which now has almost 1,500 followers. She used the page to share education information about bone marrow transplants, the stem cell donation process, and how donor matching works.

In August 2018, Aaron finally received his bone marrow transplant. As Taryn would say later, the transplant saved his life – but he almost died in the process.

About halfway through the transplant, Aaron started to get so sick that they stopped, completing the second half the following day. Then, in the words of Dr. Smith, “all hell broke loose.”

“It was the most horrific three days.” Taryn said. “We prepared for the worst. There were people lining the corridors of the ICU praying for him.”

Thankfully, the incredible news came back: the Adenovirus was not in his bloodstream. Aaron spent the next month in the ICU recovering, and another three months in isolation.

Three months after his transplant, Aaron could go home. He left the hospital in a wheelchair – but with a huge smile on his face!

Thankfully, since his recovery, Aaron’s time at the hospital has dropped significantly and his doctors have seen a major improvement in his body’s ability to fight infections.  He’s tolerating things he couldn’t before, like coconut milk ice cream. Taryn says that being able to eat more food is the next big challenge.

For more information about boosting your immune system, read here.

With less infections and hospital visits, Aaron can finally go to a normal school. At first, Aaron had very little in common with other kids his age, given that he had spent most of his life inside of a hospital. But since that hospital time has been cut significantly, Aaron is making tons of new friends at school and on sports teams.

“We risk his life every day sending him to school, we know that,” Taryn said. “But you’ll see it when you meet him, you just can’t keep Aaron at home.”

Despite the fact that he can’t eat, Aaron has chosen to be a part of eating times at his school. He will drink water, chew on ice, or even lick a piece of fruit to experience the taste. “He’s so social, he just wants to be a part of it.”

Taryn would like to meet Aaron’s bone marrow donor when the five-year confidentiality period has passed. “We were allowed to write Aaron’s donor a letter, and it took us a year to write it. What do you say to a stranger who did that for your child?”

Could you be a donor for a child like Aaron?

Register to be a bone marrow donor! Anyone between the ages of 16 and 45 can register. Many blood donation drives offer the option to register. You can also apply to become a donor directly on the Registry’s website. The SABMR also offers at-home sampling kits, available at many locations nationwide, with a free collection service. All it takes to register is a simple cheek swab. For more information, check out their website at www.sabmr.co.za, call (021) 447-8638, or email donors@sabmr.co.za.

Want to assist the Lipschitz family?

The family’s BackaBuddy campaign is ongoing. If you’d like to donate, please visit their BackaBuddy page here.

BALI – ISLAND OF THE GODS

Investing in your Child’s Future

Proper Care for Children with Autism