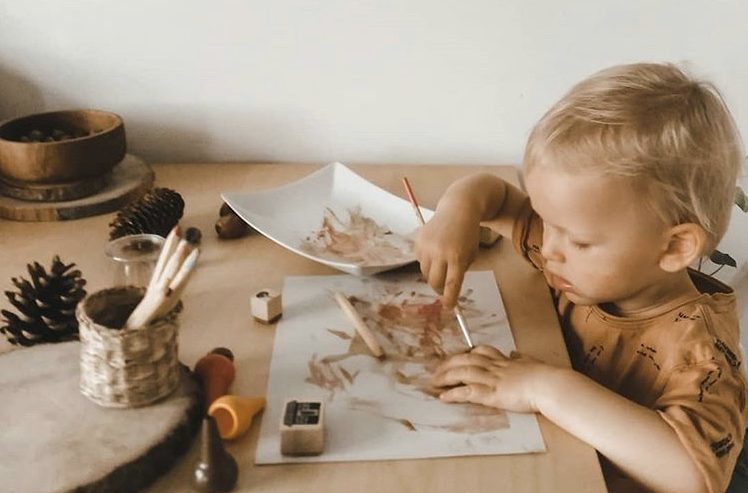 Artistic activities stimulate creativity in children, so let them paint, get dirty and have fun.

There’s a good reason why many parents shy away from letting their children paint. You can’t leave a child alone with a tub of paint without being fearful of what you’ll find on your return. One mother remembers the time she went to answer the phone and left her two-year-old toddler with a fresh tub of verdant paint. When she got back, the tub of gooey green mixture was lavished all over his chubby little body. To behold this sight begged only two questions: “What planet are you from?” and “What did you do with my son?”

However, not every painting session needs to end with an alien invasion.

Find some other ideas for creating art from recyclables, good for developing your child’s artistic skills and the planet too.

Painting is such an important developmental activity that a little mess shouldn’t put parents off. It stimulates creativity in the child and is a means of expression.

Painting also improves finger strength and the use of hands and eyes together encourages hand-eye co-ordination. Younger children should use a fatter paintbrush or thicker crayon, progressing to a thinner one as they get older and their pencil grip improves.

Another benefit is that it can help identify developmental issues. Stick a huge sheet of paper on the wall or on the table in front of the child, or put him in front of a blackboard, and encourage him to draw over the whole expanse with big sweeping movements from left to right. If the child is not using the whole sheet or if a left-handed child is drawing on the left and a right-handed child on the right, this could be an early indication of a problem.

A child’s first artistic milestone is at about 18 months. This is when they will start to draw seemingly meaningless scribbles. At about three years, a child will progress to drawing “people” – circles with giant eyes and limbs protruding straight from the head. Until the age of about six years, pictures still often need to be “explained” to parents.

Parents’ appreciation and acceptance of their child’s artistic offerings is of utmost importance.  Showing that you value their artwork helps build confidence in their abilities.

Tempting as it is to try and show your five year old that a human hand does not have 50 fingers, it’s best to bite your tongue and rather pile on the praise.

“It’s not important if your child’s work is good or bad,as long as they are happy and can play and have fun with art. There’s so much peer pressure in modern society to be better and more colourful than the next person. It’s not necessary to thrust these emotions onto our children,” says Cape Town artist Richard Scott.

“Make sure there’s lots of space to mess when you paint with little children. The best works come from letting them loose.”

Create a happy atmosphere where children can relax and let their creative juices flow. Designate a special area or go outside under a tree where you don’t mind a bit of paint splattered about. Put aside old clothes especially for painting and place visually stimulating things around that children can use as subjects.

The first art milestone is at 18 months when most toddlers begin to pick up fat crayons and start making meaningless scribbles on paper. Sometimes walls and floors are the preferred media. Babies are very tactile and love to use their fingers and hands to explore their surroundings. Encourage your toddlers by giving them tubs of paint to finger paint. If you don’t like the mess, mix Maizena or sago with water and let them paint with that.

Between the ages of two and three years, a toddler’s first paintings are often blurs or blobs of colour with little form. They frequently paint with only one colour. In the next stage, they begin to make controlled scribblings. Drawings contain lines and circles, crosses, squares and dots. Colour is still unrealistic and random. Your children know what their scribbles mean even though you’d never guess what it was on your own.

This is when they start to paint “people” – with limbs extending from the head and prominent eyes. They try to combine circles and lines, and the scribbles more or less correspond with what they are drawing.

From four to five years, paintings start to show more detail like arms, legs, fingers and facial features. The children begin to draw animals and houses, which float in mid-air because their spatial expression is still absent. They place themselves in the middle of their drawings and their use of colour is unrealistic. Pictures still often need to be “explained” to parents.

From six to seven years, people are drawn using the same basic human figure in different sizes. Children like to draw the sun and birds flying. Their use of colour becomes more realistic and hair and clothes are used to indicate gender. Children enlarge things that are important to them. If they have an earache, for example, they are likely to draw a large ear. The door is low because they can walk through it and the window is high because they cannot open it themselves. They draw objects on a base line and a tree that is higher than the house. Some children draw skylines although others seem to grasp the continuity of the sky. They also draw transparent pictures, like a stick figure with clothing drawn over the lines. Movement is represented graphically; for example, feet will be wide apart if the subject is running. There is a greater awareness of detail and children become self-conscious about their drawings, which enhances the care they take with their art.

For full freedom of creative expression, make sure your child’s art area has the following:

Hang it or frame it

Consider creating a special display zone somewhere in the home where you can proudly display your child’s contribution to the art world. And, if it’s a particularly good picture or one that holds great sentiment, consider framing it and hanging it in a permanent display.

Fun in the Sun

Valentine’s Gifts from the Heart

Out in the Cold: Outside Activities

Always Something There to Remind Me