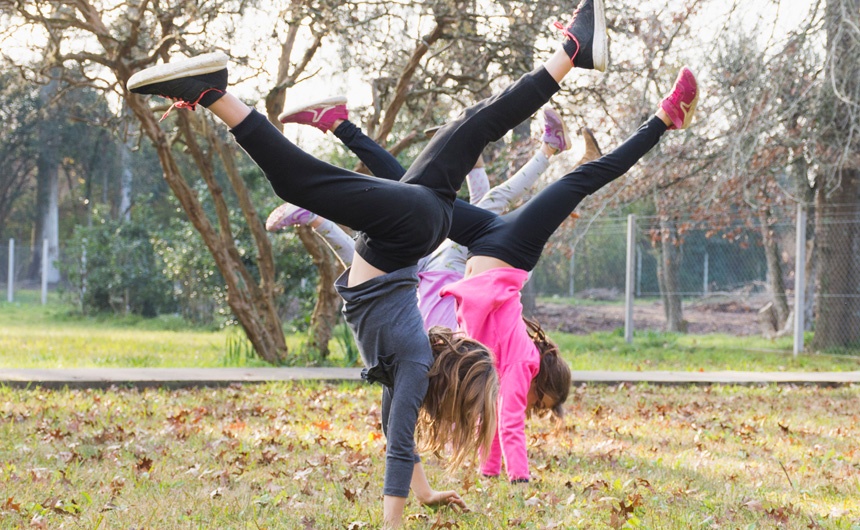 Is your child a budding sports star with dreams of one day competing in the Olympic games? Here’s how, with a little imagination, you can recreate the Olympics in the backyard and unlock their potential in a safe environment.

Help little sport stars to unlock their Olympic potential. Here’s how to recreate the Olympics in the backyard. From shot put to gymnastics and even steeplechase events, all it takes is a few props, some imagination and a set of rules. And we’ve added some fun non-Olympic activities too. Let the games begin!

Calling all lightweights and heavyweights, this Olympic discipline is best performed outside away from the windows. Arm yourselves with tinned food of varied weights and sizes. From tiny tomato paste tins to tins of tuna chunks that could feed an army of athletes, the idea here is to stage an over-the-shoulder throwing competition. Points should be awarded for greatest distance and height thrown, most creative technique and loudest and most imaginative grunt made on release of the tin.

Traditionally performed with horses, you may substitute the live beast with a tame broom. In the backyard, create an adventurous obstacle course of jumps, puddles and tunnels. Then it’s off to the wardrobe to find the closest thing to jodhpurs, jackets (try the trusted school blazer) and helmets. Saddle up and get galloping. Fastest time around the course wins. Prizes should also be considered for most handsome horse and best-dressed rider.

On your hands, get ready, go! This event may be performed on your own, against a wall or in pairs, depending on ability. Younger or less experienced hand-standers may require a little help to achieve balance. First prize is awarded to the hand stander who stays on their hands the longest – assisted or unassisted. Take it a step further and try to walk on your hands if you can. You may also want to try this with headstands. Trust me, it is the easier option. Just find yourself a nice soft pillow.

This is your chance to get really creative and recreate the Olympics in your backyard. Choose an apparatus to work with – ribbon on a stick, or a lightweight ball or hoop. Then choreograph a simple gymnastics routine of leaps, somersaults, cartwheels and double back flips (just joking) that incorporate innovative and interesting use of that apparatus. And don’t forget the music. It will give your routine a very individual theme. Costuming is also an important factor to consider. Leotards, swimming costumes, and even underwear will certainly add to the experience. Just make sure those opening and closing poses are well-rehearsed. They can make or break a performance, I am told.

Get the walking shoes out, line up all participants and warm up those hips, because this walkabout will take you out into the neighbourhood and around the block. Remember there are very strict rules when walking:

Podium positions should be awarded to the speediest walker and definitely the silliest walker.

It may not boast the prestige of being an official Olympic sport, but if woodcutting can make it, then I think there is room for wheelbarrow racing. An old favourite and a definite crowd-pleaser, wheelbarrow races really need no explanation. Set up a course, find a mate and line up those chariots. Expect a few spills along the way. The wipe-outs are the most fun and perhaps the best way to judge the winner of this particular event.

And you thought this was just a game for grannies. This gentle sport that displays the greatest of ball skills may not be played at a pace, but it can bring out the most competitive spirit in all of us. The object of the game is to deliver, by way of rolling, a ball closest to a placed white ball (called a jack) towards the end of the green – this is the area you play on. You can nudge out competitors’ balls along the way. The ball that is closest to the jack is the winner. While it is essentially an outdoor game, any flat indoor surface will do. And while the real game of lawn bowls requires very definite ball size, shape and weight, using a variety of different balls could make for a lot more fun. Imagine playing it with a rugby ball …

This gem of a game was created on the decks of Royal Navy aircraft carriers where tackle rugby may have hurt more than usual if you hit the ground. Equipped with a tag tucked into the back of your pants, players grab the tag instead of going for a tackle. The game works pretty much along the same lines as touch rugby except, by grabbing the tag, you have proof of the actual tagging, which basically means fewer fights and a more harmonious game. This game has fantastic, exhausting qualities.

While croquet does not really feature on the Olympic line-up, this version of the game might just earn its stripes. Just wait until the Olympic committee hears about it. Traditionally played on flat, manicured lawn, while sipping gin and tonic, croquet is the game for aristocrats; 4×4 croquet, however, is not. It’s a backyard classic that requires players to hit golf balls, hockey balls or cricket balls through a series of obstacles using golf clubs, hockey sticks, cricket bats – whatever – over unmanicured terrain.

You only need two people to really get this game going. Inside or outside, volleyball requires a net and a ball. In fact, a net is not even necessary. A rope strung between two trees or two chairs to indicate the different sides of the court will suffice. Choose your ball depending on the age of players – the younger ones usually prefer a softer ball. Try using a balloon instead of a ball if you are playing indoors. Its erratic nature will put a hysterical spin on the game.

Of course, there are other games for children that will be just as much fun and stimulating. And, once you’ve done recreating the Olympics in the backyard, you can move inside and enjoy some board games.  It’s always a good idea to get outdoors during winter, here are some fun activities to keep the children active.

Fun in the Sun

A Fusion of Taste