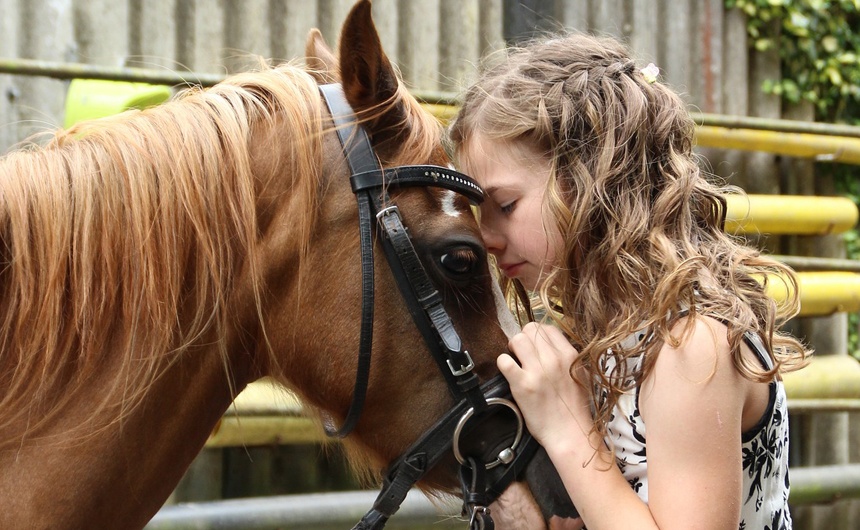 To those who have seen their child healed almost subliminally, the science of therapeutic riding rings true. Here’s what you need to know about horse healing.

My seven-year-old son Daniel never stops moving. If you force him to keep still, he sings or hums until he’s able to wriggle, squirm and run around again. The first time I draped him across a pony’s back, he was just six weeks old. It was like flicking a switch. He calmed down almost immediately, and, probably for the first time ever, lay quietly while awake. Over the years, this equine form of Valium has never failed to work on him.

“Horses have been described as the finest mood-altering drug for those they motivate, with only positive side effects,” says Lisa Hare, a Cape Town-based occupational therapist and senior riding instructor who specialises in therapeutic riding.

Therapeutic riding is relatively new in South Africa. “It’s been used in Europe for the past 50 years and in the USA since the 1970s”, says Lisa. ” teaches cognitive, physical, social, emotional, educational and behavioural skills.

There are no age limits. Sharon Rufus, a Johannesburg-based clinical psychologist and Riding for the Disabled instructor, says the youngest child she’s worked with was three months old and the oldest person 65.
“The great thing about children riding as a therapy is that it’s fun and it’s outdoors. It’s also something many children fantasise about, but few get the chance to do. Instead of being teased or treated as if they’re strange because they’re having therapy, these children are the envy of their friends,” says Lisa.
Dr Lana van Niekerk, head of the Occupational Therapy Division at the University of Cape Town, explains. “It’s an opportunity to master an activity that is perceived to be very challenging. Activities in which all children engage tend to have lower esteem value than those in which fewer children engage. The esteem value of horse riding is therefore very high.”

The relationship between the horse and the child is a safe, reciprocal one that involves caring and is non-judgmental. In other words, horses don’t say, “if you ride me well, I will like you”. Lisa firmly believes that good therapy ponies are sensitive to their riders’ needs and make allowances for their inexpert riding.
It’s an important aspect of the therapy. Children with emotional disabilities often struggle to form friendships or develop relationships. Their riding abilities make them more acceptable to their peers.
The relationships children develop with the horses they ride are sometimes the first positive relationships they’ve ever had, says Lisa. Having done it once with an animal, it’s often easier for them to form relationships with people. “Learning to control the horse teaches some children how to control themselves,” she explains.
Sharon says: “The horse is a large creature that is gentle and prepared to tolerate things that people may struggle with. For a lot of children with emotional difficulties, the horse is very good at reflecting their emotions. So if a child changes his or her mood and becomes soft and gentle, the horse reflects that. For children, it’s a good way to learn about the consequences of behaviour.”

What horses can do for children

Riding also gives children the opportunity to care for something and experience being cared for. And it provides an element of risk, which is important in developing emotionality in children.

“Children with physical difficulties and developmental issues are often cocooned against danger, but riding provides some risk. For a child, being able to do something they thought they couldn’t do is valuable in developing self-esteem and self-confidence.”
“Riding guarantees a real and observable outcome – being able to ride. It’s also brilliant in terms of offering a continual upgrading of the challenge,” says Lana.
“If I compare it to riding a bicycle, once you’re on it you could go faster or maybe try off-road. With horse riding, the possibilities are endless in terms of improving skill and trying out these skills in different situations and contexts.”

Horses are not a miracle cure, but Lisa says the results sometimes seem to say otherwise.
Lizl Kruger, 11, who now lives in England, is a lively, intelligent girl who now rides her horse competitively. She’s come a long way since she started therapeutic riding at the age of three and a half because she didn’t speak.
“She was so withdrawn that if you stood on her toe she didn’t react. She wouldn’t eat, she was very slow, and she hated loud noises. If she had to cross a road she blocked her ears and froze. The doctors didn’t know what was wrong with her, but they suspected autism,” says her mom, Yolanda.
“I brought her to Lisa and it was unbelievable. The first time we put Lizl on a pony the words just poured out of her. She sang songs we’d sung to her for years without her reacting. She talked and talked. Within four months of starting riding she was talking properly.” It sounds like magic, but part of it is pure science.
Sharon explains: “The horse’s movement stimulates the middle ear. The low brain structure – the foundation area of the brain important for speech – registers the anti-gravitational and acoustic response that responds to the stimulus.

Horses heal a range of problems

Therapists use horses to help children with problems ranging from poor speech to emotional problems, hyperactivity, low muscle tone, disruptive behaviour, hand-eye co-ordination, Down’s syndrome, cerebral palsy, autism – in fact, most things you can imagine.
For children with physical handicaps or difficulties, horse riding provides a unique freedom of movement that no other therapy offers. “The horse’s movement rotates the child’s hips just as correct walking does,” says Lisa.
This correct movement can help teach children with the potential physical ability to walk. “Riding therapy is known as a neuro-muscular facilitation technique. This means the movement of the horse is creating responses in the muscles and nervous system that are being processed in the brain,” explains Sharon.
“The movement is causing rotation around the spine and the effect of this is to normalise muscle tone, increase strength in the muscles, and position the pelvis as though the child was walking. The act of moving on the horse is training the brain pathways to understand the physical processes of walking.”

Riding is also good exercise for children who struggle to move themselves. “It offers an intense work-out for children with physical problems – every time the horse takes a stride, the rider’s body automatically adjusts eight times,” Lisa says.
Riding can also provide huge emotional benefits to children with physical disabilities. A University of Cape Town study found that riding can give independence. “The horse becomes an extension of the person, giving them the ability to move in ways they are usually unable to do – walk, run and explore new environments,” says Lana.
The study also found that mastering the art of riding could have a huge impact on the child’s sense of identity. With the help of the horse, the child learns it is possible to overcome physical barriers and restrictions, and experience something natural, challenging and fulfilling.

GROWING UP TOO SOON – PRECOCIOUS PUBERTY

Falling between the gap