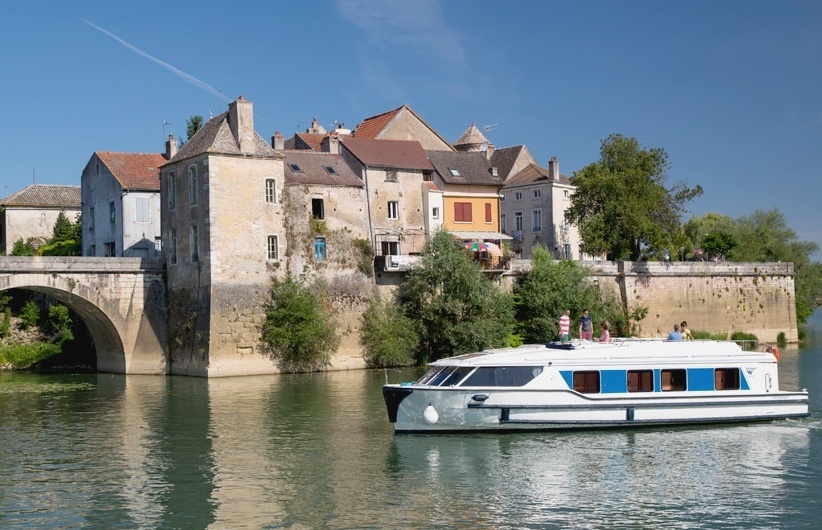 Armchair travel becomes a reality for a lucky family. One mother shares her family’s adventures as they set off barging in the French countryside.

The joys of barging in the French countryside. “Non, c’est tout fermé!” What do you mean everything is closed? The oddities of French sub-cultures had thwarted us on a number of occasions during our week-long voyage down the Nivernais canal. It was dinner time in the tiny hamlet of Chatel-Censoir and we had been saving ourselves throughout the languorous day of barging for the consummate plat du jour, or plate of the day. But with everything closed, we were left with no choice but to cycle back to our barges, The Ha’Penny 900 and the Commodore 1370, with empty stomachs for some impromptu yoga on the deck and a leftover meal of Champagne, olives, salami and stale croissants. This was the beginning of our adventure that was barging in the French countryside.

Let’s start at the very beginning

Five days earlier, our two families had set out on the leisurely journey down the Nivernais from the little town of Migennes after an initial diversion in nearby Troyes. In that ancient town, originally the capital of the Champagne region, we had our first and, thankfully, only sampling of the regional speciality, andouillette, a small sausage made of tripe. It is incongruent that a region that produces incomparable bubbly can also produce this little French oddity, which could best be described as haggis’ wayward cousin.
The Nivernais is a less-frequented canal that originally formed part of an extensive network of waterways used to feed Paris with much needed supplies of wood for building and heating. It meanders vaguely south-north through Champagne and Chablis country, occasionally merging with the river Yonne, and eventually joining the Sienne. We had chosen to go upstream, from north to south, taking us from the wider, more commercial waterways at the start, to more appealing quieter waters.

After a 10-minute boating lesson in broken Franglais, we were deemed competent enough to be sent on our merry way. We began with much nervousness and fumbling, but after the first few locks, the process became second nature, and provided welcome opportunities to stop and chat to fellow travellers and an array of lock-keepers. Often we enjoyed the luxury of being the only boat passing through the lock with not another barge in sight. This afforded my six-year-old son, Braddyn, the opportunity to help the keepers open and close the locks, which proved to be quite an adventure for him.
On the canals, you generally have the freedom to moor anywhere. On the first night we moored next to an embankment just outside Bassou and enjoyed a lovely home-cooked meal on the deck of our barge. We prepared most of our meals in our galley which, although small, was very well equipped.

Day two saw us eagerly waiting at the first lock of the day for it to open at 9am. After an hour or so, we found the perfect spot to leave the barge safely moored, manhandled the bikes onto the shore, and cycled off to visit the lovely little village of Appoigny. Bicycles are optional extras when booking a barge, but we found them to be essential equipment. The narrow back roads and farmlands yearn to be explored, so we ended up cycling through the most pristine French countryside for over two hours, sans even the slightest complaint from the younger members in our party.
Our first glimpse of Auxerre, the largest town on our chosen section of the canal, was truly breathtaking. We opted to motor past the busy marina to moor alongside a park where we managed to locate a public swimming pool for a much needed dip. Here some of the guys, much to their chagrin, had to borrow Speedos as they were not permitted to swim in their swimming shorts. Another French oddity for which the only explanation given was “it’s the rule”.
Walking through this beautiful old town as the sun was setting was a real highlight. The cathedral towers over the town, which is dotted with attractive squares below half-timbered houses. When planning our holiday, we opted for a shorter route that would allow us the flexibility of unscheduled stops and see us avoid endless hours of motoring. Choosing a late start the following morning, we stopped in Vaux for a long cycle up a steep hill to see the vineyards and much touted view, over the valley. We missed the view but did find the vineyards and an abundance of cherry trees, laden with sun-baked, ripe and fleshy fruit. Needless to say we rolled down the hill, replete with big, red, happy grins. “Merci Monsieur le Fermier – we left €10 (about R100) under the big rock in the northern corner as thanks.”
The heat and exertion of that ride called for the spontaneous water fight that ensued while filling the barge’s water tank. Chugging back to Champs-sur-Yonne, we moored alongside our friends at what was fast becoming our favourite time of day. Sitting on the roof of our barge, with a sketch pad in one hand and a glass of chilled wine in the other, watching my son ride his bike up and down the towpath as the sun was setting, is the closest I have come to an extended moment of pure bliss in a very long time. There really is very little that compares to the joy of barging in the French countryside.

The next day, with temperatures over 30˚C, our friends again took to cooling off in the canal while being gently towed behind their barge. We had resisted this temptation based on rather sage advice proffered by the guide books and some of the locals. The heat was, however, to prove our undoing and we finally relented. The welcome relief of the cool water was quickly dissipated as we slowly gathered a motley selection of canal debris around our necks as we were gently towed along. This included the odd bottle, a couple of bird feathers, and bits of soggy toilet paper. Yes, most rented boats pump their effluent directly into the canal. Not surprising then, that we later had to make a stop at a pharmacy for a magic potion to calm our son’s angry skin reaction.
Running low on Champagne, which should never happen in France, we cycled from Vincelles to Irancy where we joined a wine-tasting in a blissfully cool cave. Champagne in hand, we puttered into Pregilbert for an overnight stop next to a lock. Here a late addition to our party, a septuagenarian aunt, joined the group, having arrived by train from Paris and having been ferried by bicycle to the boat. After an alfresco dinner on benches conveniently located along the deserted embankment, our boys, ranging in age from six to 19, held their own version of an athletic track event late into the night. Good simple stuff, that.
Mailly-le-Chateau had us hiking up a rather steep path for a superb view of the surrounding area from the castle. A short stroll through the deserted hilltop town in search of an ice cream proved fruitless as all of the local inhabitants had barricaded themselves in the cool shelter of their homes during the heat of the day. Salvation eventually came in the form of ice creams and ice-cold beers in a wonderful waterside café in Merry-sur-Yonne, nestled in the shadow of the spectacular Saussois rocks, which form a sheer cliff about 40 to 50 metres high.
Mooring just outside of Clamecy that evening, we cycled into the town for a dinner of escargot, chicken and chips. Clamecy is classified under the French tourist criteria as among the most beautiful routes in France, and it did not disappoint.

After an early start, a full day was spent in Chatel-Censoir, where we had a memorable picnic lunch along the banks of the canal. Returning to the marina, we drank a final toast to our faithful friend, The Ha’Penny, which had been our home for the past week, and were filled with melancholy made only slightly more bearable by the knowledge that this was merely an au revoir.

The barges are easy to operate and no previous sailing experience is required. Choose a route where lockkeepers are in attendance as operating the first few locks can be a little daunting. The cruising season is from March to October every year; we chose to go late in June. Do hire bicycles as this gives you freedom to visit nearby villages. You should bring the minimal amount of clothing, swimming costumes, comfortable non-slip shoes and waterproof clothing for the occasional rain shower. Other useful items include sunglasses, sun cream, insect repellent and hats.
For companies that offer self-drive barge cruises in France, visit leboat.co.uk, barginginfrance.com, cruise-in-france.com or bargeconnection.com

From Vloggers to Superheroes-Books for Tweens and Teens

Get out the Toys, It’s Playtime